Brain trauma and degenerative brain diseases have inevitably meant irreparable damage. The dream of being able to recreate what has been lost often fails because of inadequate knowledge of how extremely complex the brain is. Researchers have now developed a modelling system that mimics the early stage of the development of the human brain in the laboratory and may thus help them to discover more rapidly how to produce human neurons from human stem cells in the laboratory.

By Morten Busch for Sciencenews.dk

One simple single cell – with thousands of possible paths. This is the situation of embryonic stem cells in creating a complex human brain. Stem cell researchers also face this challenge when they try to restore damaged brain tissue. The big difference is that the stem cell has a predetermined differentiation pattern, whereas researchers have to guess. A new specially designed and fabricated microfluidic cell culture system has been designed to enable researchers to unveil how stem cells get from point A to point B as rapidly as possible.

“Studies on brain development in humans have been limited by the lack of tissue samples and modelling systems. We have succeeded in cultivating human stem cells in a special microincubator that can mimic the normal developmental pattern of the fetal brain. The model provides unique insight into the development of the human brain and can thus help to accelerate the development of stem cell treatments for brain disorders such as Parkinson’s disease, epilepsy and dementia,” explains Agnete Kirkeby, Associate Professor and Group Leader at the Department of Neuroscience, University of Copenhagen.

The beautiful idea of a tree of life of brain development has been the driving force for the new research project, in which researchers from the Department of Neuroscience and the Novo Nordisk Foundation Center for Stem Cell Biology, DanStem at the University of Copenhagen have developed a model that mimics the early stage of development of the human brain in the laboratory.

“We have virtually no data on brain development from the early embryonic stage in humans, since we have only been able to study this based on aborted pregnancies, and this material is often from later stages and in really poor condition. In addition, brains from mice and chickens have been studied, but these are quite different from humans, so especially the time from the second to seventh week in the development of the human fetus has been virtually uncharted territory so far,” says Agnete Kirkeby.

The new model for studying the early embryonic brain is based on stem cells grown using a microfluidic-controlled stem cell regionalization (MiSTR) approach developed in collaboration with bioengineers from Lund University in Sweden. 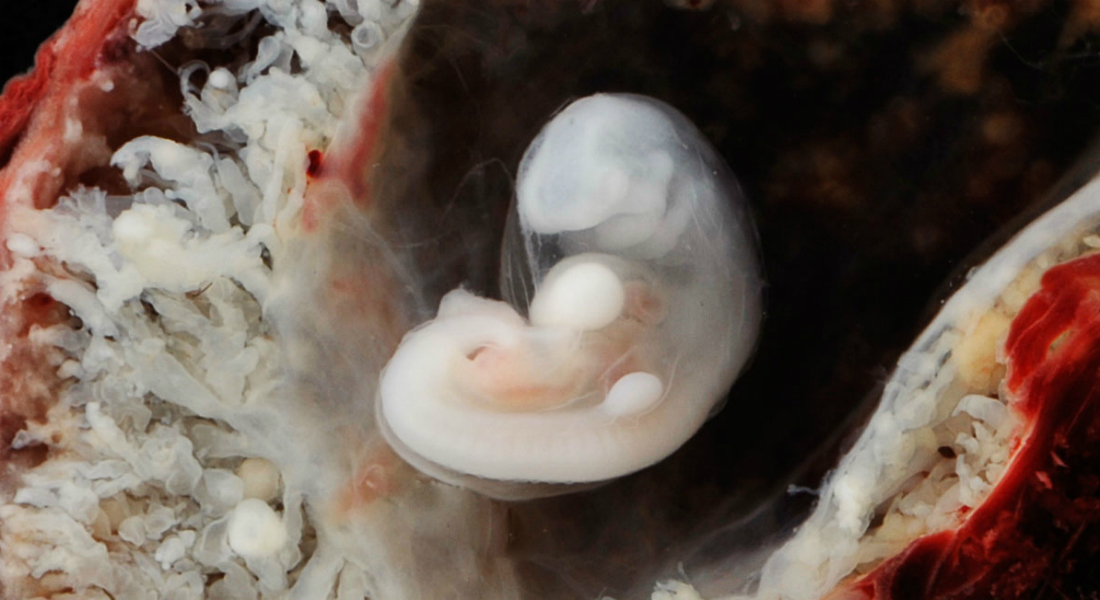 Image of a human embryo surrounded by placenta, around 7 weeks of age. Studying brain development of humans at early stages is nearly impossible, and researchers have therefore produced a model to mimic human brain development in the lab. Photo credits: Dr Steven O'Connor (Houston, Texas)

“We know very little about the human brain and especially about its very early developmental stages. By observing how the cells evolved in the system, we could map the otherwise unknown neural regions of the brain’s tree of life,” says Agnete Kirkeby, who adds:

“The system enables us to study tissues for the first time that resemble brain tissue from the early embryonic brain. We can therefore analyse what happens to each cell during development.”

The system thus acts as a guide for producing different types of nerve cells for developing new stem cell therapies – a process that can otherwise take years.

“I have worked for several years on stem cell therapy for Parkinson’s disease with colleagues from Lund University and the University of Cambridge. It took us more than 10 years to learn how to produce a very specific type of nerve cell – the cells that die in Parkinson’s disease – because we had to depend on a trial-and-error method to develop the right nerve cells from the stem cells. Knowledge from our new model will enable us to shorten this process considerably in the future,” concludes Agnete Kirkeby.

In addition, this model may also pave the way for new ways of testing for substances that can affect brain development, such as how brain cells in the early embryonic stage respond to some of the chemicals we are exposed to in our daily lives.

“Modelling neural tube development by differentiation of human embryonic stem cells in a microfluidic WNT gradient” has been published in Nature Biotechnology. In 2018, the Novo Nordisk Foundation awarded a grant to Agnete Kirkeby for the project Mapping Human Neural Lineages in a Novel In Vitro Model of the Developing Neural Tube Built with Morphogenic Gradients.