Scientists from The Danish Stem Cell Center (DanStem) at the University of Copenhagen and Hagedorn Research Institute have gained new insight into the signaling paths that control the body’s insulin production. This is important knowledge with respect to their final goal: the conversion of stem cells into insulin-producing beta cells that can be implanted into patients who need them. The research results have just been published in the well-respected journal PNAS.

Insulin is a hormone produced by beta cells in the pancreas. If these beta cells are defective, the body develops diabetes. Insulin is vital to life and therefore today the people who cannot produce their own in sufficient quantities, or at all, receive carefully measured doses – often via several daily injections. Scientists hope that in the not-so-distant future it will be possible to treat diabetes more effectively and prevent secondary diseases such as cardiac disease, blindness and nerve and kidney complications by offering diabetes patients implants of new, well-functioning, stem-cell-based beta cells. 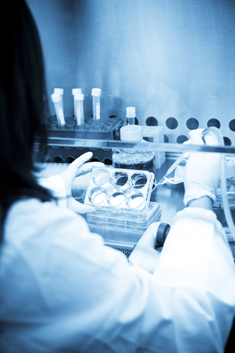 “In order to get stem cells to develop into insulin-producing beta cells, it is necessary to know what signaling mechanisms normally control the creation of beta cells during fetal development. This is what our new research results can contribute,” explains Professor Palle Serup from DanStem.

“When we know the signaling paths, we can copy them in test tubes and thus in time convert stem cells to beta cells,” says Professor Serup.

The new research results were obtained in a cooperative effort between DanStem, the Danish Hagedorn Research Institute and international partners in Japan, Germany, Korea and the USA. The scientific paper has just been published in the well-respected international journal PNAS (Proceedings of the National Academy of Sciences of the United States of America) entitled Mind bomb 1 is required for pancreatic β-cell formation.

The signaling mechanism that controls the first steps of the development from stem cells to beta cells has long been known.

“Our research contributes knowledge about the next step in development and the signaling involved in the communication between cells – an area that has not been extensively described. This new knowledge about the ability of the so-called Notch signaling first to inhibit and then to stimulate the creation of hormone-producing cells is crucially important to being able to control stem cells better when working with them in test tubes,” explains Professor Palle Serup .

This new knowledge about the characteristics of the Notch signaling mechanism will enable scientists to design new experimental ways to cultivate stem cells so that they can be more effectively converted into insulin-producing beta cells.

About DanStem:
The Danish Stem Cell Center opened in the Summer 2011 as a hub for international basic, translational and early clinical stem cell research. Professor Serup and his group joined DanStem in January 2012 to partake in the build-up the center together with three other, internationally renowned research groups recruited from Sweden, Switzerland and Scotland.

About Hagedorn Research Institute:
Hagedorn Research Institute (HRI) is part of Novo Nordisk A/S. The Institute’s work is directed at developing better treatment for people with diabetes – both through basic research and research aimed at early application.  HRI was established as an independent entity in 1978 and today is an internationally recognized and prize-winning research unit. Read more about HRI here